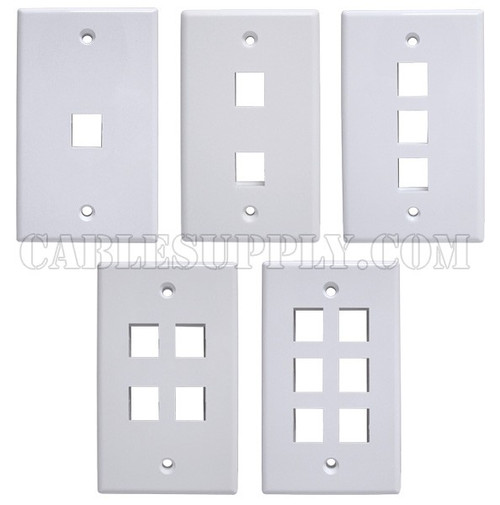 Keystone wall plates are available in white and ivory and also available in 1 port, 2 port, 3 port, 4 port, and 6 port. Any type of keystone jack can snap right into the ports including shielded jacks, RJ45 jacks, RJ45 coupler jacks, RJ11 jacks, HDMI jacks, and coaxial keystone jacks (sold separately). Because the jacks can be replaced and removed there are also blank inserts available to fill a port if a jack were to be removed without having to purchase a faceplate with a different amount of ports. The faceplates are standard sized at 4.5 inches by 2.75 inches and include screws to attach them to a standard sized mud ring.

To install a Keystone Wall Plate, first take a measurement of the height of other wall plates in the room/building. They are generally mounted to be about 16 inches off of the ground but this can vary. Take a mud ring (also known as a plaster ring) and hold it backwards and level up against the wall where you wish to mount the wall plate. With the sharp tip of your drywall saw make four marks on the wall on each inside corner of the plaster ring. The first cut to make into the drywall should be a horizontal one. Cutting horizontally first is a general practice because if you were to run into a stud then you can simply re-measure and go to the left or right a couple inches. If you were to cut vertically first you would not know if there is a stud and would therefore have an ugly cut in the middle of your drywall. Once both horizontal lines are cut then cut the vertical ones. Take the plaster ring and bend the tabs inside towards the wall snugly by hand; use pliers to cinch the tabs down into place on the drywall. Keystone Wall Plates come with hardware that is painted to match the color of the face plate. Simply install the keystone jacks into the ports on the face plate and then screw the hardware into place. Do not over tighten the hardware because these wall plates are made out of plastic and would easily crack under too much torque.